Quinta Avenida has been open only since the middle of December last year but has already found fans for its delicious Japanese cuisine, which has a few small Mediterranean touches.

Located on the Avenidas in Palma – an easy walk from underground public car parks and the bus and train station – Quinta Avenida looks understated from outside but wows with its stylish interior. The front area of the restaurant has a bar for drinks – including reasonably priced cocktails – and snacks such as spicy soya beans, pork and prawn gyosas, or bao buns. There are also a few booths near the front for cosy eating.

Quinta Avenida’s open kitchen allows you to see the chefs at work and the traditional robatayaki coal grill. If you like a ringside seat for culinary action, sit and eat at the counter. Tables for two people line one wall, with larger tables towards the eye-catching rear of the restaurant, which has partitioning to create a more intimate feel for each table.

All the favourites of authentic Japanese cuisine are here – gyosas, tataki, miso soup, tempura, sashimi, nigiris, rolls; main-course dishes include salmon teriyaki with cauliflower foam, and magret of duck with kumquat marmalade. Side dishes include green asparagus with sesame kimchi, roast sweet potato, and corn cob with garlic and mint butter. The scallop ‘brochetas’ with yuzu kosho (two for 8,50 €) and panko-crispy Osaka-style duck gyosas (five for 8,50 €) were highlights but everything was full of flavour, superbly cooked and looked good too.

Desserts are presented in lidded glass jars on a tray at the table for you to make your choice.

The owners include Mallorcan chef Raul Enseñat but, interestingly, nobody Japanese! Our smart server Andoni was efficient and friendly and, for the record, the serving team speaks good English. 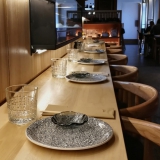 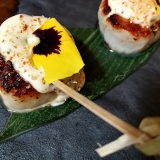 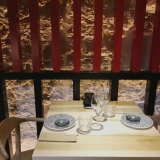 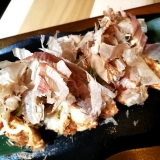 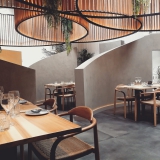 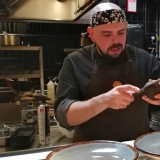 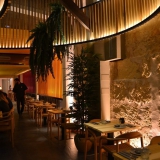 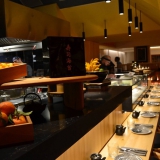