Tickets 15 or 25€ and available to purchase from:

Dahler and Company Real Estate and in collaboration with Riding Academy Mallorca under the direction of Heike Rigbers an award-winning horse trainer from Germany and the rest of the team at Hipica San Magraner have teamed up with The Allen Graham Charity for Kidz to present a not to be missed charity dressage event this week!

On Saturday 14th September at the Hipica Palma San Magraner, more than sixty riders of varying abilities will compete together in the Torneo Beneficio de Doma Clasica. Spectators will be able to watch the event for free. Now in its second year, the dressage tournament has attracted young and not so young riders from all over the island and beyond to come together to raise money for disadvantaged children and young adults living in the Balearics.

Dressage is an Olympic sport consisting of a highly skilled riding. It takes the form of a horse and rider performing from memory a series of extremely complex yet elegant movements. Dressage, although seen as less dangerous than show jumping is a demanding sport which forms the basis of training for every top-level rider and horse in the field of equestrianism.

Last year, with their debut event the organisers with Dahler and Company as the main sponsor raised an impressive €7000 for ASPANOB and this year they have chosen to support The Allen Graham Charity for Kidz. Well known to the international residents of Mallorca, The Allen Graham Charity for Kidz supports children on the island who are living in one of the 27 orphanages or are being fostered in family homes. Crucially the charity also supports young adults after they leave care to find further education and work experience to set them on their future paths of success in their lives.

The main sponsors are Dahler and Company, of which Claudia Krekeler and Liza Markert are both keen equestriennes. “We are very excited with who we have managed to also attract as sponsors already this year,” said Claudia. “For example, we have the luxury car company AUDI, the outdoor furniture company Terraza B, Claudia von Brauchitsch, and Simone Bratschi. The prize sponsors include AXA, Veltins, Palma Aquarium, Buroladen, Bäckerei Son Sardina, Frischeparadies, Restaurant Vivo, Wine and more, Xamena, Muller, Highlönder, In-all-one, Doreen Imme, Modigliani, 12 Apostel, Hoofgold and Riding Academy Mallorca.  We are open to offers of sponsorship levels of all levels, from donating a prize for one of the classes to having a stand at the exhibition. There are many levels open to choose from we would love more businesses and individuals to contact us if they would like to participate”.

The competition will start at 10 am on Saturday 14th September and will consist of ten levels of classes. Son Magraner is just a five-minute drive north of Palma, next to the University.

This art exhibition features local artists and their work will be sold to raise funds for local not for profit, DIME Cuenta Con Nosotros.  DIME is an association of volunteers who visit the palliative care units on the island.

Sa Roqueta Club invites you to join them for a wonderful afternoon in the countryside, with Mallorquin flavoured snacks and a chance to listen to the singer Jaume Anglada.  There will also be children’s entertainment from  “Petit Island“. That will be on the 21st of June at S’hortet de Na María in Sencelles.

100% of your participation will be fully donated to two projects:

Bamba, “Neema project in Kabernet”, Kenya. Thanks to them, they empower women with resources and training to be independent and self-sufficient.

“A possibility of life for Myombe”, whose first project is to build a school in Myombe, Tanzania.

Musical Benefit Concert for the AECC 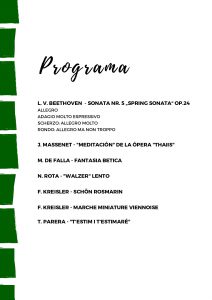 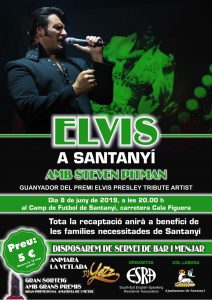 Fundraiser for families of Santanyi who find it hard to make ends meet!  There’ll be an Elvis tribute concert with Steven Pitman, winner of the Elvis Presley Tribute Artist!